Do you wish you​​ could go back and retrain as an actor or showcase again but don't have the time or money to do so? Have you been on the circuit for longer than you can remember but are frustrated and tired? Then this course is absolutely what you have been looking for!

The ICAT Artist Development Course is available at our London school. It is an unbelievable opportunity for adult actors of any age to be reintroduced to the industry at minimal cost with expert coaching and 4 separate opportunities to invite and be seen by an impressive host of industry guests.

ICAT is run by award winning artists from international theatre, film and television who continue to work with some of the greatest actors, directors and companies in the world.

This is an initiative to give trained actors a chance to take advantage of our very popular showcase season by providing tailored training sessions on Mike Alfreds principles plus voice and movement support and industry prep while being grafted into the current 2 yr Diploma graduate year group projects including two public productions and two separate showcases. Current participants are meeting and learning from  casting agents from leading companies as well as training under highly respected artists from television, theatre and film.

*There will be support sessions in voice and movement throughout the three terms as well as industry prep with great guests and opportunities to develop your understanding and approach to acting as a business.

The year starts in September but we also take late starts in January.

Places for the artistic development are offered via audition only.

Audition requirements: A 2 minute monologue of your choice, classical or modern
Where: ICAT London
When: 28th July 2019 (further audition dates TBC)
How: By audition only. Email info@icat.actor with your CV to register interest.
Audition times: (please be available all day)

Course fee: £3,950 payable in installments (£1000 non refundable deposit upon acceptance of a place followed by three termly payments of £983)

Sign up to our Newsletter and receive this FREE ebook as a gift! 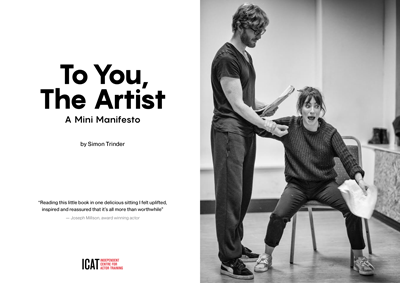 A short, inspiring manifesto for the actor, exploring the unique nature of what we do and celebrating the powerful creative drive in all of us.

“This honest little book could do well to always be in any actors pocket!”